Nova Praxis is an indie Science-Fiction RPG. There are two variants, one using Savage World, the other being powered by the Strands of Fate system, which is the one I’ll be talking about. Nova Praxis is written by Mike McConnell and published by Void Star Studios and was released in its current form in 2013 after a public beta test.

As a sci-fi game, Nova Praxis deal with many of the themse: cyberpunk, transhumanity, corporate conspiracies, magic disguising as technologies.

Large corporations struggle for control. Science and tech advancement reached a Singularity: the ultimate AI has been created. This AI became sentient, invented a lot of new techs and then committed “suicide” (crashed itself). From that all that was left was the archive, that gigantic trove of data that includes technologies like compilers to make any object from raw material, energy source of incredible efficiency, jump technology to travel faster than light, and apotheois, the ultimate tool to transhumanism. Lot of these technologies aren’t even well understood in their theory making it look like magic. Everything is easy to manufacture with the compiler technology. This is a post scarcity world where the economy is now based on favours and reputation instead of currencies.

But this is not counting without the corporation and the power struggle that led to the worst war ever, a war that saw the use of a weapon of mass destruction: the technophage. That weapon was too powerfull, and became the antagonist destroying both sides… and rendering Earth uninhabitable. We are after the apocalypse, the millions of survivors are spread through out the solar system, and some exo-planets. All under the the controls of Houses, mega corporations that supply the worlds, and provide substinance to their members. And there are the apostate: those that live out of the “system”, refusing the authority of corporations, and end up having to survive on their own with scarse resources as the Houses restrict trade and access to compiler technology.

Transhumanism is a key component of society. From pure human, biosynthetic bodies (sleeves), cybersleeves (mechanical bodies) to SIM (pure software beings) there is a variety of forms people can have. Virtual reality is prevalent, SIM live in it, the other can enter it with proper interfaces.

As a 274 pages hardcover book or PDF, Nova Praxis contain everything you need to play - except the FATE dice. Strands of FATE, Void Star Studios own branch of FATE is the system that powers the game. It is meant to give a bit more traditional system while retaining the main characteritics of FATE.

The book is divided in 7 chapters. It starts with the game universe and then continue with the rules.

The first chapter gives you an overview the world: the main timeline and events, and some terminology.

The second chapter expands on describing the Galaxy: the current solar system and colonies in it, the few known exoplanets, the virtual realities, the technologies and the culture.

The third chapter talks about the agendas: in a universe controled by mega corporations there are definitely interests at stake, and hidden agendas.

The fourth chapter (mislabelled chapter five in the book and the PDF) start the second part of the book, with the rules of play. It goes on explain how to play and the general rules for aspect, stunts, FATE points and resolving conflict.

The fifth chapter gets you started with character creation, establishing your character concepts, selecting your stunts and/or programs, short of the gear comes next.

The sixth chapter is about gear: regular equipment, weapons, sleeves (your artificial body), augmentations, and vehicles. As for vehicles there is not much of a catalog, just rules to describe them.

The seventh chapter ends as an apendix with sample NPC individuals or as a group and a glossary.

Interestingly there is very little in the way of adventure module but the supplement Machinations that is meant to be a GM companion seems to have that angle covered. 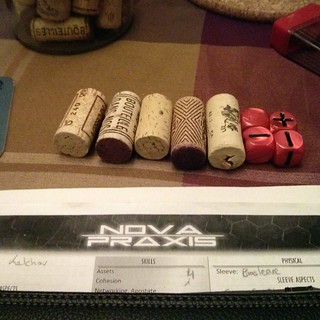 We just finished a long campaign where we started as bunch of “for hire” team working for a shaddy boss encoutered in a virtual world simulating Chicago ; finishing as the founders of an interstallar union of humanity.

Things we did: uncover a corporate conspiracy, explore the wreckage of the big wars on Mercury, run away in hideout into a research base on an asteroid, finding the horrible creature that were the product of engineering, witnessing the disappearance of Europa (the Jupiter Moon), engage into a diplomatic mission on Callisto to talk with the returning people from a lost human colonisation mission, being the team to explore an alien spaceship of a race stripping out planet for mining, etc.

With the direction we are taking our GM, who deserve the credit for that epic scale adventuring, declared that we outran the system. We are reaching the age of interstellar travel and exploration, and for that purpose we are gonna move to Mindjammer — I’ll review it later. This is not a judgement on the game, just that we went way further than the game creator might have envisionned.

Nova Praxis is one game that tries to bring its own personality in a Sci-Fi world with dark themes and hopes.